As you may have noticed I have blogged twice about the new awesome feature in Power BI Desktop where we can build our own external tool buttons in Power BI Desktop. Here is a link to the previous posts. Analyze in Excel (link) Open in Tableau (link) One perhaps forgotten member in Power BI is […]

#PowerQuery – Dynamically reference a table via a Parameter

The other day I had a fun challenge from my co-worker – Søren Faurum – that wanted to change the refence to a column name from one table to another table with the same column name. OBS – The solution is not supported in the Power BI Service. In his case it was And he […]

I recently created an external tool to PowerBI desktop that connects your Power BI desktop model to Excel (https://eriksvensen.wordpress.com/2020/07/27/powerbi-external-tool-to-connect-excel-to-the-current-pbix-file/) and then I thought – could we also have a need for an external tool that could open the desktop model in Tableau desktop. So, I downloaded a trial version of the Tableau Desktop to see […]

In the July update of the Power BI Desktop we now can add external tools to the ribbon. If you install the latest versions of Tabular Editor, DAX Studio and the ALM Toolkit these will be added as tools in the ribbon. But you can also build and add your own tools. David Eldersveld (link) […]

Last month I had the pleasure of presenting a session at the free Power BI Global Virtual Conference. The conference was arranged by Avi Singh – PowerBIPro – link to his YouTube Channel here My session was about Power Query and how to make your Power Queries more dynamic. You can download my presentation and […] 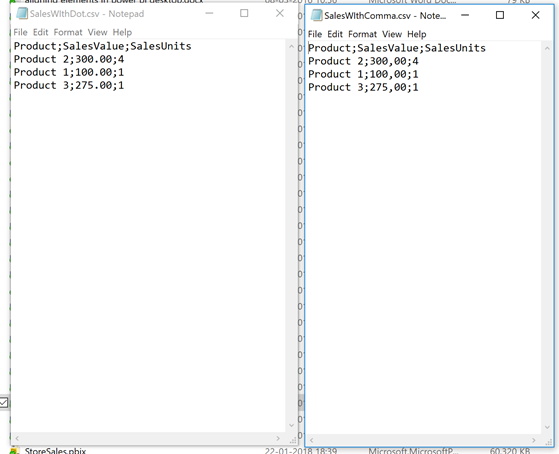 As my Power BI Desktop uses Danish settings and danes uses , as a decimal separator Power BI desktop will think the values is 30.000 instead of 300 etc. – and we have to tell Power Query that the source is from another Culture – so I click Edit

As we can see from the documentation Table.TransformColumnTypes – the function has an optional parameter called Culture –

But when we use this when importing a file where the sales value is formatted with a , as the decimal separator and we use the same culture value (“en-US”) then we have the problem.

So how can we make Power Query dynamically determine which local to use ?

The step before we “Changed Type” is called “Promoted Headers”

To check whether the Sales Value contains a comma – we can use the Text.Contains function

Will give us true if the cell has a comma in the cell before its changed to a decimal value.

When we know this we can change the

The if statement will then use the da-DK culture if the SalesValue contains a comma.

And in the example file with the dot

Hope you find this useful – Power On!