#PowerQuery – Add Year, Month and Day to your date table with Date.ToRecord – #PowerBI

When you build a date table in Power Query you might use the functions under Date to add year, month and day And this will give you three steps in your Query But we can do this a bit faster, and you will save a few clicks with your mouse If you add a custom […]

How to avoid a rename step in #PowerQuery when you use Table.FromList – #PowerBI

Here is a tip that reduces your Power Query steps with 1 step less. When I build date tables I typically use the function List.Dates to create a list of dates. As I want it as a table I use the Ribbon interface to convert the list of dates into a table Which then gives […]

I have had a couple of people posting comment on one of previous blogposts “Setup data driven report subscriptions for #PowerBI paginated reports with #PowerAutomate” asking me on how to specify values for multi value parameters in a Paginated reports. So, I decided to write a blog post on how you can do it – […]

Yesterday I tweeted about how I solved the implementation of a Many 2 Many filter using Calculation groups. And was encouraged to write a blog post about this – so here it is 😊. The scenario Imagine a simple star schema where we have a fact table with sales and a customer and Date dimension. […]

When creating Power Pivot models in Excel and you hide all the columns in your fact table/-s – Excel will show a ∑ next to the table name and show these first in the PivotTable field list in Excel.

The fact table cannot be accessed via the PivotTable Fields selector….. 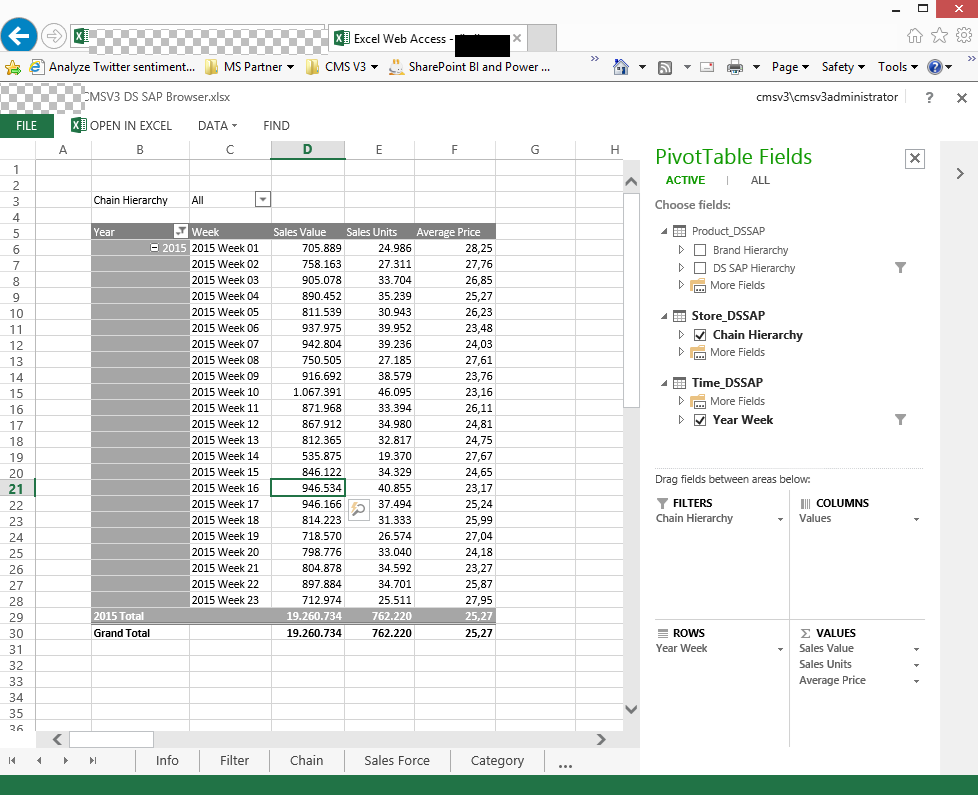 If you unhide a field in the fact table

The table will now show as table in the field list in Excel.

And when you browse your model in SharePoint the Facts can now be added to the pivot table in the browser. 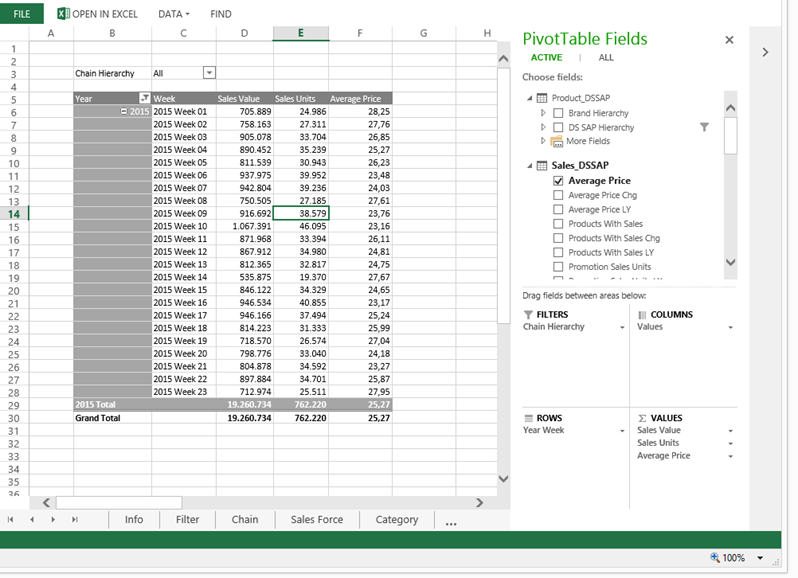 So if you plan to publish your models on SharePoint – do not hide all the columns in the fact tables unless you do not want the users to be able to modify the values in the pivot tables.

Now that was a big surprise – and I thought why not try to work around this.

However, writing a macro to do this seemed a bit over kill – so I continued reading about slicers and their properties

Moreover, it turned out that if we look at the SlicerCache it has a property called “VisibleSlicerItemsList”

That is not read/only – but Read/Write

Therefore, we can use this property to set the selected item in a slicer connected to an OLAP source – and here is the code to set a selected item

Run the code (or modify to your need) to select the item.

Copenhagen municipality is exposing open data via this site – http://data.kk.dk/ . There are some interesting datasets but also some quite strange ones – for example a dataset containing all the bollards in the city.

Even though the data seems irrelevant at least for me – it is fun to use Power Query to extract the data and then use Power View and Power Map in Excel to visualize the data. 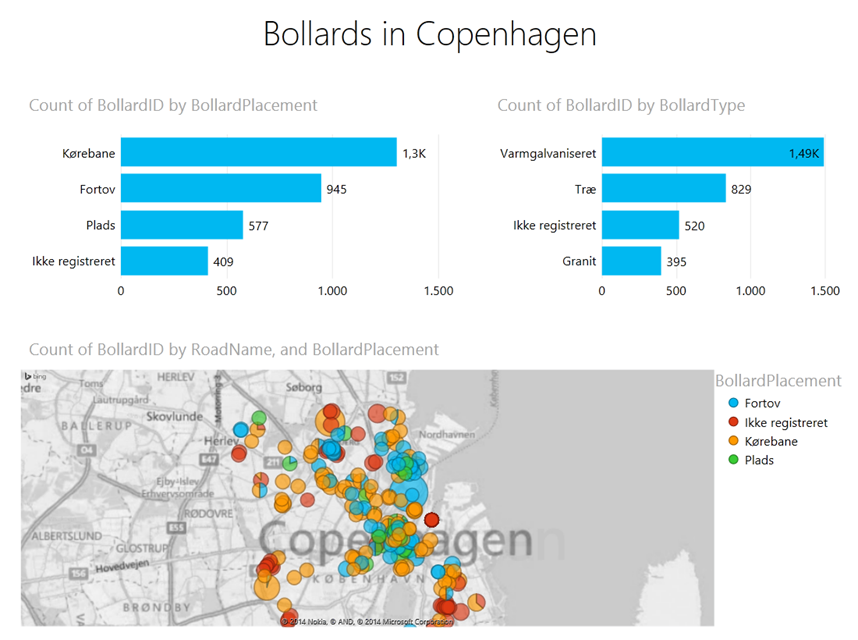 During the process, I learned a nice feature in Power Query that you might find useful as well.

The data can retrieved as a CSV file via this link

And by changing it to JSON – I could retrieve the data as a JSON document.

I then clicked the list of records to expand all records 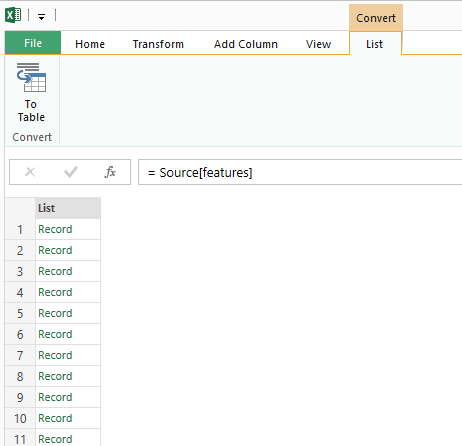 Converted it into a table 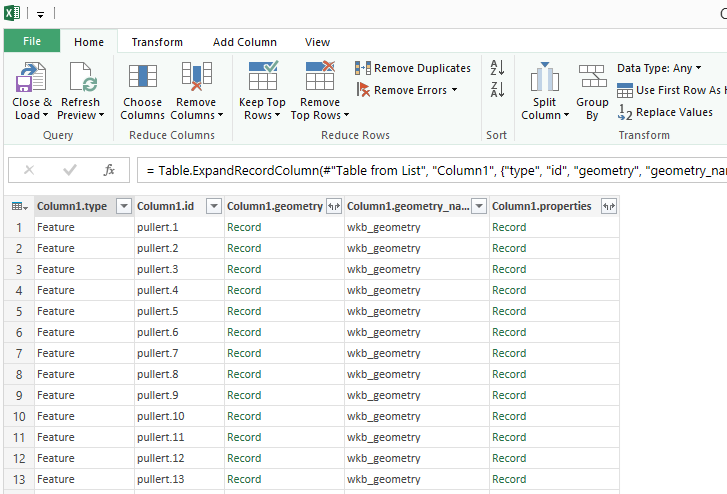 Expanded the Column1.properties to get all meta for the bollards

And then expanded the Column1.geometry to get the point information

This gave me a challenge because the coordinates was a list of values containing the Latitude and longitude and when expanding the column the list values will create two rows per bollard.

I didn’t want that as I wanted a separate column with longitude and latitude – but this can actually easily be done in Power Query.

Add a Custom Column and add the following formula

Where 1 refers to the row number in the list – Remember its zero based to 1 will be row 2.

And then I have to columns

The rest is renaming columns, deleting unwanted columns and one very important thing specify the Longitude and Latitude columns as decimal numbers otherwise Excel will import them into the datamodel as text values with no option of plotting them in Power View or Power Map.

And then we can start visualizing the data using Power View and/or Power Map.

One import thing about plotting the bollards in Power View is that it doesn’t handle many unique points (locations) – so instead I added the Road Name as location and then Power View will group them on the roadname – then add the Bollard ID in location as well and the user has a drill down option by double clicking the bubble.

Another options is of course to use Power Map

In this case, I modified some settings in order to view the point better.

When you are creating measures in your Excel Power Pivot model you can do yourself a great favor if you first set the number format on the column in the data table.

In this example I have a SalesUnits column that is a decimal number and has set the format to General – which is the default.

When I click the Autosum button in the task pane to create a measure or enter the formula manually the number format will also be set to general.

But I want the number format to include a thousand separator and no decimals which means I have to format both measures manually. 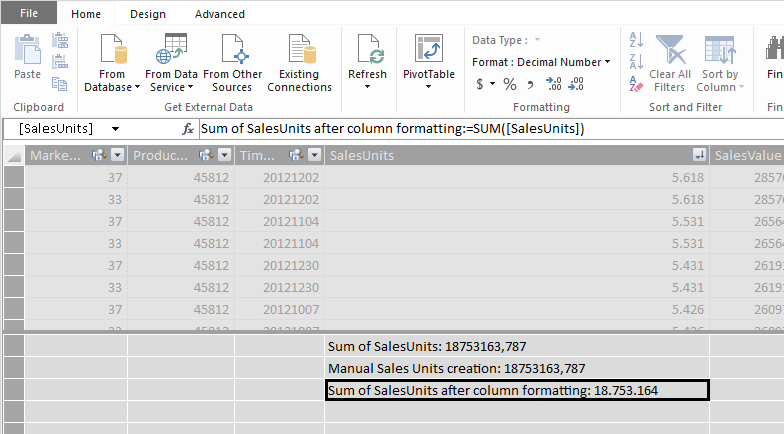 OBS!!! This only works if you use the AutoSum button.

So if you want to create measures with CALCULATE etc. start by clicking the AutoSum – and then modify the measure and you have the number format in place. 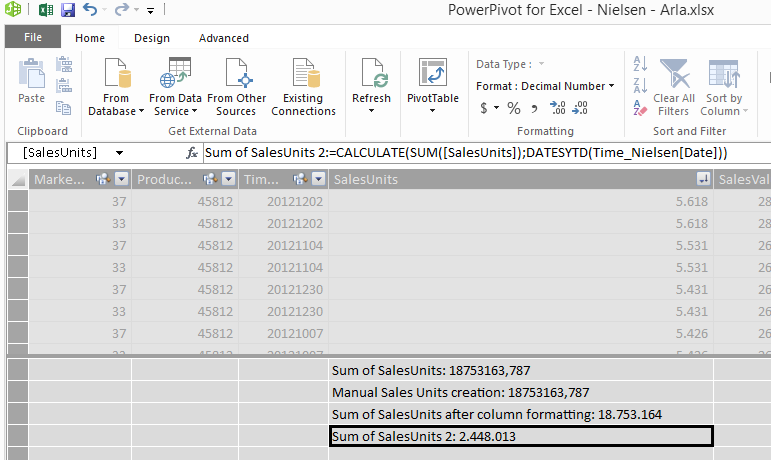 Hope this can help you.

But in Power Pivot you have to use the FORMAT function instead of the TEXT function.

The Q&A feature in Power BI has so far been limited to the samples files provided by Microsoft – but now you can use your own models.

I have played around with the feature and here is the result. Click the picture to see a video of a demo. 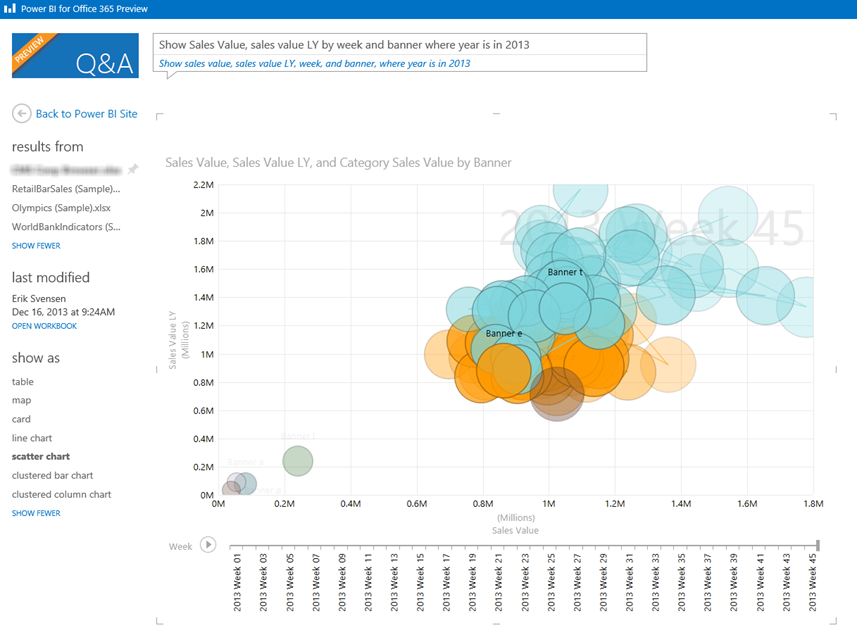 I think it’s pretty awesome and will open up new possibilities for the BI users – It will be very exciting to try to see how the users will feel about this new tool.

Here is a quick tip to update selected tables in your Power Pivot model instead of doing it one by one or via the “Refresh All” option.

If you switch to Diagram View and select the tables you want to update while holding the CTRL key – and then click Refresh – This will only update the selected tables.

In this case I have selected the Sales, Chain and Product table

And voila – 3 out of 6 tables updated

Hope this can save you some update time.

My most popular post so far has been “How to get selected items in a slicer without VBA” and I have demoed the solution at SQL Saturday and Campus days in Copenhagen.

This solution makes heavy use of cube functions and can be fairly complicated to construct and maintain – so I decided to see if it was possible to do try and see if I could list the selected items in a separate slicer.

So the slicer “Selected weeks” lists the selected items and I can actually copy this slicer to all the sheets where I have reports that is connected to the first slicer “Week”.

Here is how I did this

Clicked on Open and selected a Table

This gives me a standard Excel table linked to the Power Pivot model as a DAX Query. 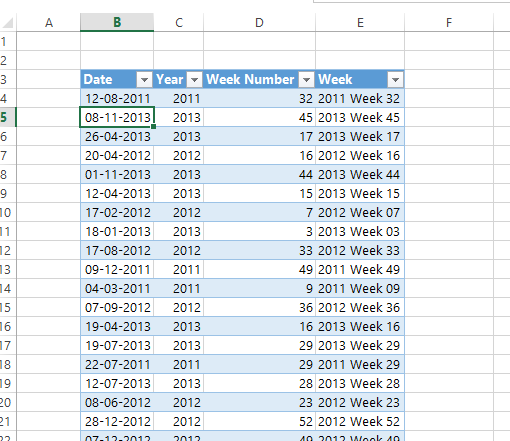 Next to the table I added a column called “Selected Weeks”.

And I added the following formula 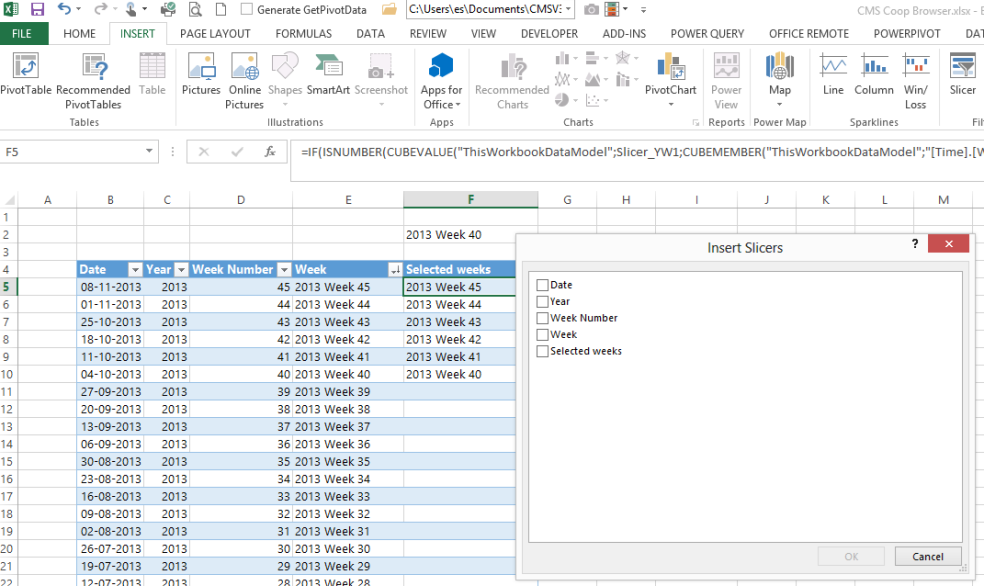 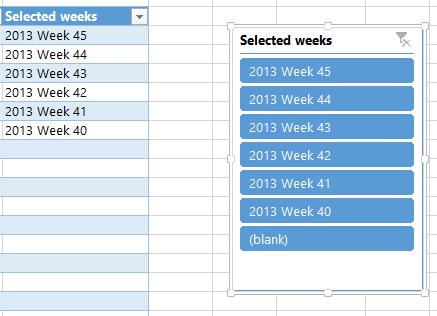 Clean up the blank

As all the rows that wasn’t selected items is set to return a blank – the slicer will have an item with a blank item – this can be avoided as well.

First of this table should only be used for this purpose so we actually don’t care what the blank value is – and as we now that slicers return unique items we can instead of returning a blank item – we can return one of the selected items.

So above the table I create a formula to get the first selected item in the primary table.

By using the formula

And modify the fomula in selected weeks to

And the blank member is now gone 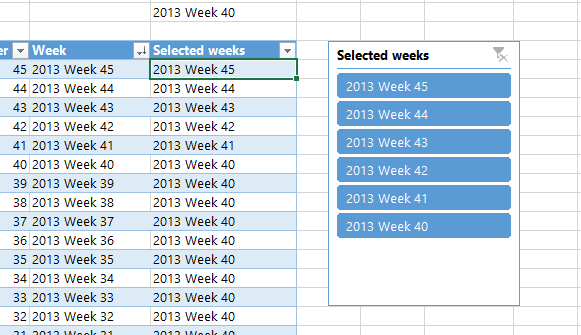 And I have a nice clean slicer with the unique items selected in the “Power Pivot” slicer – and as this is linked to a standard Excel table – I can copy this to all my report sheets where I want to display the selected weeks – that I typically let them select on a central Filter/Slicer Sheet.

The model retrieves data from a SQL database so the table queries are either Stored Procedures or handwritten SQL statements.

Before my in this case Stored Procedure 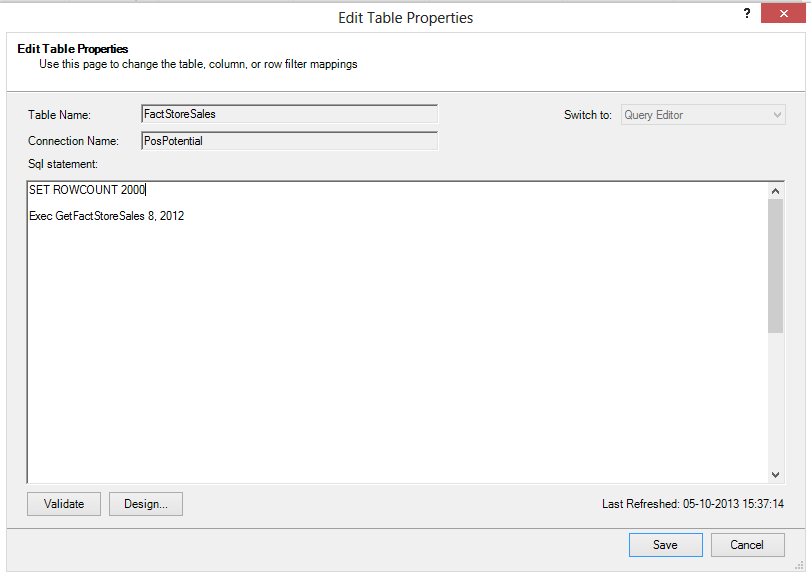 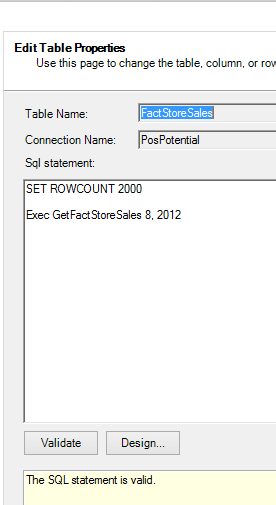 And then when I need the full dataset I use

By the way use the /**/ to add comments to your queries so you create short description on what your query is intended to do.

In Excel 2013 the way to add Calculated fields changed a bit from the first version.

In the new I have to remember to set the correct table name in the first drop down box. In this case “Product” is the default table.

And yes – I tend to forget to change it sometime and my calculations typically ends up in the first table in the list.

So I decided to see if I could change it and then I found out that changing the order in the power pivot window had absolutely no effect on the default Table name and then it hit me.

That the Table name in the Calculated Field dialog was the FIRST table I imported in my model.

So if you want to control the Default table name – Start by importing the table you want as your default table for calculated fields.